Wolford bells were rung on Wednesday 16 December 2015 at 6.30pm to remember Sergeant James William Harris who died 16 June 1940. The Wolford war memorial says, erroneously, ‘killed in action June 16th 1941’ so to mark the 75th anniversary, it was suggested that we ring exactly between the dates, so 16 December it was.

We had originally planned to ring on 16 June 2016 to mark the 75th anniversary, but by the time we had discovered this error on the memorial, we had missed 16 June 2015. 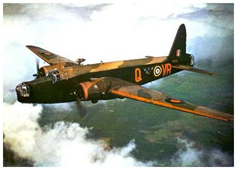 James was the son of William, a labourer and Sarah Harris of Great Wolford. Five baptisms of William and Sarah’s children are recorded in the parish registers; Frank Raymond, born 1904, Thomas Edwin in 1906, Edith Maisy 1908, Kathleen Margaret 1911 and James William in 1914.

James died Sunday 16 June 1940 aged 26 and is buried at the Dreux Communal Cemetery, Eure et Loir, France along with his two crew mates. He was on a reconnaissance mission over France and had taken off from his base in Odiham, Hampshire. He was the observer in a Blenheim Mark IV bomber (R3817) and according to squadron records, it’s possible his aircraft was shot down by an RAF fighter. No. 59 Squadron was equipped with Blenheims in May 1939 and was moved to France in October 1939. They undertook reconnaissance missions before being forced out of their airfields by the advancing Germans. The squadron was withdrawn to southern England where it continued to operate over France.

James’ father William died in 1949 aged 78 and Sarah in 1965 aged 92. Both are commemorated in the churchyard. A substantial obituary of William appeared in the Parish magazine in January 1950 and it states: ‘in the evening the bell-ringers, under Mr George Hiatt, rang a muffled peal in his memory’.

The Wolford War Memorial records the name as William James Harris. The RAF record and the Commonwealth War Graves commission both record his name as James William Harris. Why this should be is open to conjecture. It could possibly be because that he was known by his second name and family preference was to place the names with William first. If anyone can throw any light upon this question we would be most interested to hear. 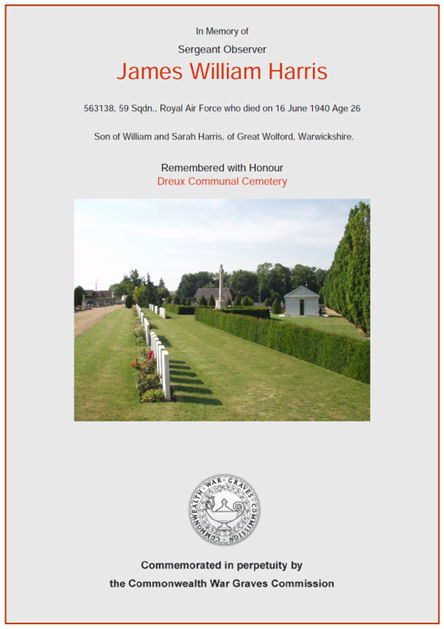 The quarter peal rung in memory of Sergeant Harris was 1280 Grandsire Doubles. The quarter was rung in 44 minutes. The band comprised;