Letter from an evacuee

I received the following emails from Paul Ellis who, with his brother, was evacuated to Great Wolford during the last war. I wonder if anyone can shed light on his query?

My brother and I were evacuees in Great Wolford 1944/5 and to this day I have good memories of our time there and the people we were billet with, name of Stevens (Stephens?) and from memory a house called Rose Cottage. One seemingly small thing that I experienced and have never come across since leaving the village was a game that we played using a piece of wood shaped like a referee’s whistle and a stick. The idea was to hit what would be the ‘mouth’ of the small piece of wood to send it skywards and attempt to hit it when in the air. Am I making sense? As I said, I’ve never come across the game and wonder if children there play that game today?

(I attach a photo) of my brother and myself (on the left), plus Molly Stevens and our host at Great Wolford. I think that the old lady was a neighbour. I afraid the picture quality is not at it’s best. I do know that the family who took me in are no longer alive and that their house was knocked down and a new, modern house is in it’s place. Now I’ve started digging something else has come to mind, or somebody in fact. My brother and I made friends with a girl named Molly Stevens but I’m not sure how she was related to my hosts. Perhaps a mention of her in your post might also uncover whatever became of her.

I’m approaching 80 now and would love to get an answer before it’s too late! 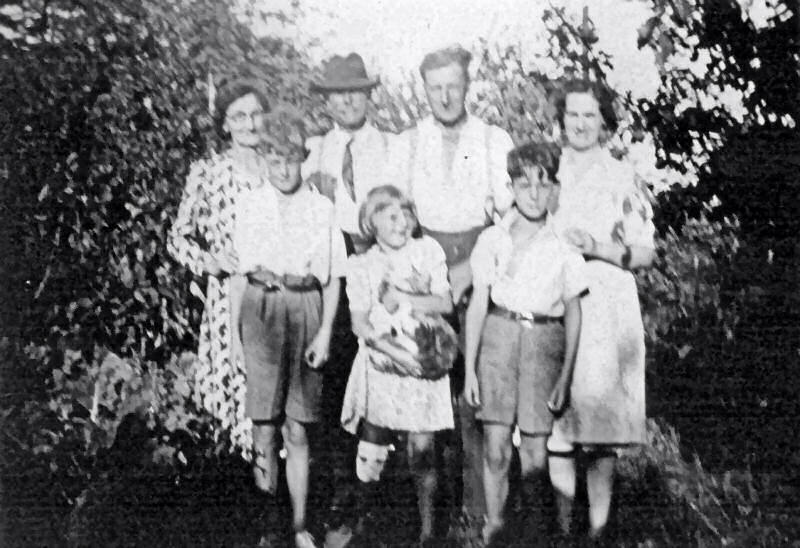 If anyone can help Paul, please email him. His address is: paellis100@btinternet.com