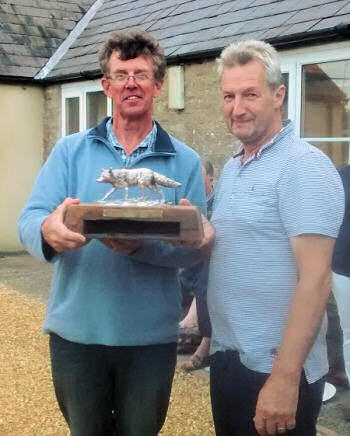 The French game of Boules or Petanque is defined  as a form of bowls played on rough ground where the object is to throw or roll a heavy ball (boule) at a smaller ball some distance away. The boule nearest the small ball wins. Sounds simple and so it is but humans being competitive by nature can turn a simple innocent game into a ferocious tussle  and so the 9th annual  Wolford Boules Tournament proved. The prize for the winners  was to have their names inscribed on  the magnificent Silver Fox Trophy mounted on a piece of ancient Bell Frame Oak from the Church in Great Wolford.

Organised by the Village Fund and refereed by  John “my decision is final” Wrench, the match took place at the Village Hall (the rough ground)  on the fine evening of Saturday July 11th. Over 40 folk of all ages played in randomly selected pairs on 4 pitches. Competition was fierce with no holds barred and well aimed boules crashed noisily all evening  pushing and  shoving each other  out of the way in their efforts to get closest to the jack.  Ref. Wrench was frequently called to arbitrate on who was closest, measuring down to the nearest fraction of an inch to ensure unbiased fairness.

Those knocked out in the early rounds  compensated themselves by being first at the bar and the buffet, then were  free to encourage remaining players with advice, criticism and general banter until suddenly the final was upon us. Simon Lewis was paired with Charlie Brittain Jones against Keith Murphy and Patrick Logue, the latter already having his name twice on the trophy. Could he get a third mention? Keith and Patrick went into an early lead and it looked as though it was a done deal but, possibly too late,  Charlie and Simon rallied drawing almost level before the early leaders pulled ahead again.

C’etait  beaucoup de Plaisir  toute la monde agreed and vowed to come back next year. Just on £300 was raised for the Village Fund in the most enjoyable way.