Wolford bells were rung on Friday 19 August 2016 at 7.00 pm to remember Pte. Bob Hiatt, a resident of Little Wolford who died during the Battle of the Somme.

Bob Hiatt was killed on Saturday 19 August 1916, by a shell, outside Contalmaison during the battle. He is commemorated on the Thiepval Memorial. Private Hiatt was serving with the Gloucestershire Regiment (10th Battalion). His brother George was a bellringer who rang tenor in the first peal for the Four Shires Guild of Bellringers in February 1910 on the Great Wolford Bells.19th_august_2016 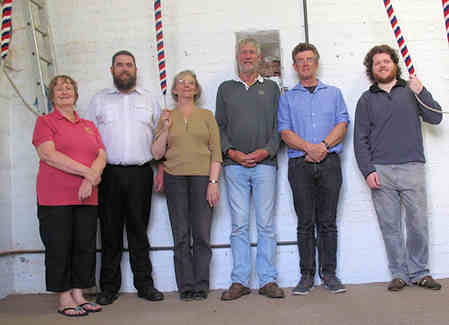 The quarter peal rung in memory of Pte. Hiatt was 1260 Bob Minor. The quarter was rung in 45 minutes. The band comprised (left to right);

The final 3 quarters to remember the soldiers on the Wolford memorial will take place from August 2018.