On the morning of Tuesday 30 June, a quarter peal was rung on Great Wolford bells in memory of Gunner Ernest Hall, the third soldier of The Great War on the Wolford memorial.  The quarter peal marks the centenary of Gunner Hall’s death on the Western front on 30 June 1915.

The quarter, 1296 changes of Plain Bob Minor, took 48 minutes and was conducted by Richard Lewis-Skeath. The band is pictured below. 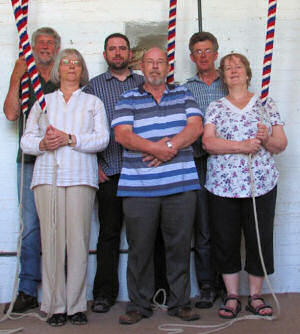 The band were pleased to have successfully completed this third quarter in the series of eight. The next quarter will be on Thursday 16 July 2015 (in the early evening) in memory of Second Lieutenant Arthur Eustace Stevens MC.

A short biography of Gunner Ernest Hall (courtesy of Lawrie Thompson and Henry Warriner) can be seen below.

In the 1911 Census, Ernest aged 16 was registered as a farm labourer, resident at The Lodge, Little Wolford. He is shown as living with his brother Sam, aged 11 and his widowed mother Jane. Sam, also a soldier, survived the war & was buried in the Wolfords in1971.

Ernest joined up on 23 November 1914.  He trained at Portsmouth and Gosport and went to France with the Royal Garrison Artillery on 11 June 1915. On 30 June, just 19 days later, he was in the gun detachment of the 31st battery of French Howitzers on forty-eight hours relief with a corporal and a few others in a trench which was under very heavy fire, when he was shot by a sniper.  The explosive bullet, which entered his chest and lungs, caused extensive damage and he died the same night at 9.40 p.m. He is buried at Chapelle-d’Armentieres Old Military Cemetery.